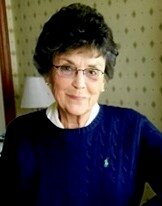 Shirley Trusnik was born on March 31, 1936 and passed away on July 10 at the age of 86. Shirley was born on the west side of Indianapolis and attended Holy Trinity grade school, St. Mary Academy and was a graduate of Marion University. Shirley met Mac Trusnik at a CYO event and married him November 1957. They bought a house in Speedway, Indiana and became members of St. Christopher church and school where their family still resides. When her house became too small for her growing family, she added rooms instead of moving because she really liked her neighbors; relationships that exist today. Shirley lived a simple life and cherished her faith, family and many, many friends. She first was a teacher at St. Lawrence School then stayed at home to raise her sister Carol and her four children. She went to classes at night to complete her college degree. When the kids were in high school, she went to work at the Indianapolis Motor Speedway Ticket Office where she retired after 25 years. Shirley and Mac had many social circles. They bowled in the St. Christopher bowling league, worked Friday night bingo and oversaw fish cutting and carryout at the festival for many years. The kids had to pitch in as well; we thawed fish, battered fish and filled the tartar sauce cups. Our family was part of a group of 7 families from Holy Trinity that picnicked each year. A softball game was the main event; kids versus the adults. With various neighbors, we camped, attended ball games, visited state parks and went to Tippecanoe River. We visited family in the summer and had many family reunions on both sides. When she started working at the track, our parents were part of a group that celebrated birthdays and traveled to races. When she retired from the track, she had a new group that met monthly for lunch. Shirley treasured her life-long friends. She had weekly lunches with women from her kindergarten class; she thought that was amazing. She belonged to a Card Club (euchre) comprised of 8 women that lasted 50+ years. These eight women raised 44 children between them. Not sure how they found time to play cards but am sure they were delighted to leave their homes and children to visit with each other. Shirley was a member of the Slovenian National Home and KSKJ. Shirley had an inner kindness that was always present. Her love and appreciation of family and friends did not need to be spoken in words, it was just there. She will be missed by her many nieces, nephews and cousins. Mac was once asked, “What is your proudest moment” and he replied “Marrying my wife.” Shirley is survived by her daughters Anna Allen (Michael), Natalie Hammer (Russ), Nancy Trusnik and Carol Sue Zeronik Denton (Michael) who joined the family at age five. She was “Gma” to eight grandchildren: Tim, Allison, Matthew, Michael, Erin, Ben, Jake and Clayton. She was “Great Gma” to four great-grandchildren: Carter, Adeline, Evelyn and Cole. Shirley was preceded in death by her parents Tony and Ann Zeronik, Mac her husband of 62 years and son Timothy (1963-2008). She is survived by her brother Mark Zeronik (Pat), and her sisters Patty Martin and Carol Denton (Michael). There is a saying that life is not measured by the number of breaths we take, but by the number of moments that take our breath away. Thank you, Mom for taking our breath away. Shirley’s funeral mass will be at St. Christopher Catholic Church 5301 W. 16th Street, Indianapolis IN on July 18, 2022 at 10:00am. Visitation will be at Stevens Mortuary on Sunday, July 17 from 4:00-8:00pm. If desired, a remembrance donation may be made to Easterseals Crossroads who were instrumental in helping Tim or St. Christopher CYO Program.

Share Your Memory of
Shirley
Upload Your Memory View All Memories
Be the first to upload a memory!
Share A Memory