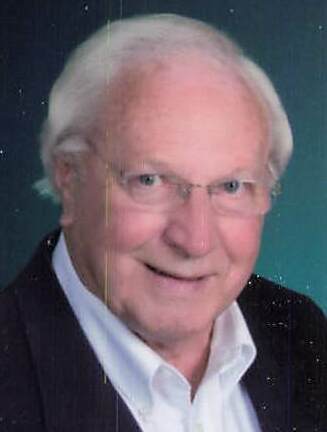 Gene P. Calvert, age 84, of Indianapolis, Indiana passed away on June 13, 2022, at home with his family. Gene was born on November 2, 1937, to Hubert and Melba Calvert in a log cabin in Scottsville, Kentucky. After graduating from Washington High School in Indianapolis in 1955, he went on to marry the love of his life, Karen Sue Davis in 1959. He had a successful career at Collins Oldsmobile prior to the opening of Calvert Motors in Danville, Indiana, and in Avon, Indiana. Gene finished his career at Kesler Schaefer Auto Auction in 2016. Gene enjoyed playing golf, blackjack, and traveling to Aruba. He was known for his “coaching from the couch” during Colts and Pacers games. He was a member of the Speedway Masonic Lodge and was a 32nd degree Mason. He was preceded in death by his parents, his daughter, Joni Walker, and is survived by his wife of 62 years, Karen Calvert, daughters: Gina (Joel Frockt) Calvert, Julie (Mike) Watts, Becky (Mike) Boyle, son-in-law: Allen Duncan, grandchildren: Kris (Haley) Walker, Victoria (Mike) Poe, Jacob Volbers, Andrea Watts, Rachel Watts, Riley Watts, Anthony Watts and great-grandchildren: Jordan, Emma and Addyson Poe, Sophie Jae Hughes, Saige Lennon Poe, Ellie Ruben, Henry Ruben and many cousins, great nieces and nephews. A special thank you to the staff at Franciscan Hospice Care: specifically nurse Liz and aide Nicole who took such wonderful care of Gene and to Home Instead for providing great additional care. Visitation will be held on Thursday, June 16 from 5pm to 7:45pm with a Masonic Service starting at 7:45pm at Stevens Mortuary, 5520 West 10 th Street, Indianapolis. Funeral service will be at 11am on Friday, June 17 following a 10am visitation opportunity. Burial will be at Lincoln Memory Gardens in Zionsville, Indiana. In lieu of flowers, the family requests that donations be made to the Lupus Foundation of America-Indiana Chapter.

Share Your Memory of
Gene
Upload Your Memory View All Memories
Be the first to upload a memory!
Share A Memory