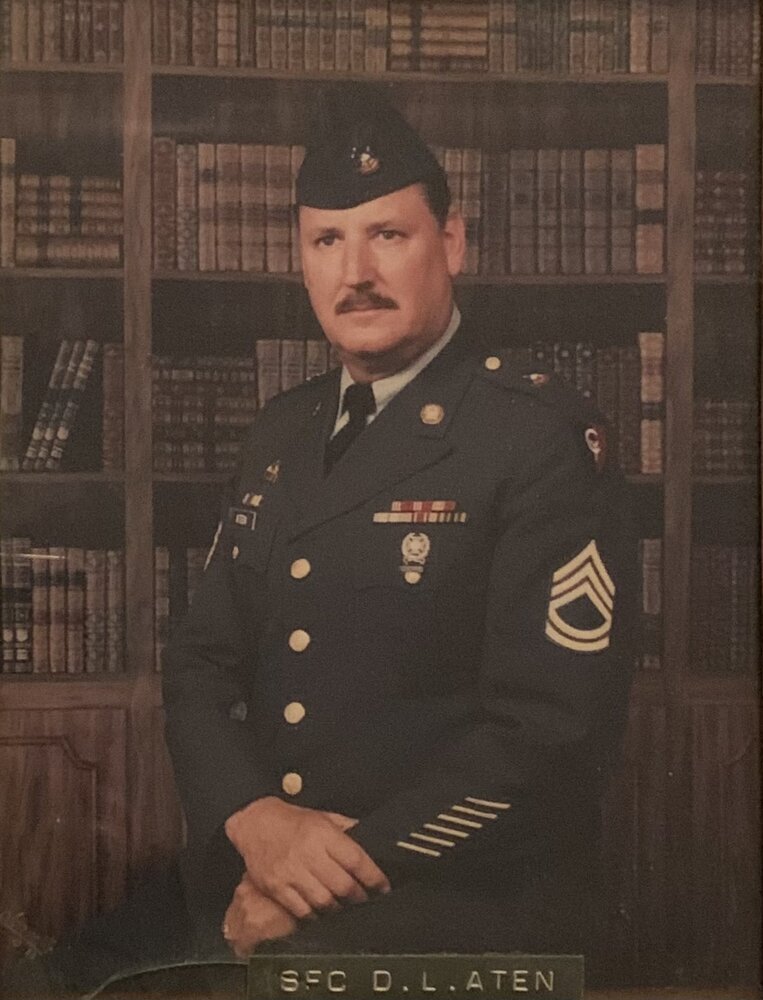 Doyle Leo Aten, born March 23rd, 1943 in Waterloo, Iowa at 9:14 PM. My father was an incredible man. He was a man’s man, intelligent, kind, loving and not to mention, funny. He showed great compassion for all those who crossed his path. His journey began in Iowa but soon after the family relocated to Indiana. When he turned eighteen, he enlisted in the United States Navy. Those 22 years were the best years of his life. He traveled all over the world. He met famous people and he also bought his very first car, a 1957 Chrysler. After the Navy, dad stayed busy. He enlisted in the Army and then the Army Reserves he retired after 22 years of service. He was an all-American hero. He went on to a career at the railroad and also spent 20 years at the Subaru Plant in Lafayette, IN. Where he met some of the most amazing people. People he was still close to today. People he cherished. His career history is stand alone admirable. He was a hardworking man whom everyone loved and admired. In his retirement years he was just as ambitious to get out and enjoy life to the fullest and he did! He maintained his presidency as President of Ghost Chasers INC. with his closest friends, George and Gary Harris, Jeff Dice, Stacy Harris and myself. He was a giving man. He made donations regularly to Father Fanagan’s Boy’s Home, Veteran’s Association and Paralyzed Veteran’s of America. He helped anyone and everyone, whether it be a homeless guy begging for change or the girl working at the gas station going through a difficult time. My father, your friend, shared his blessings. He was a person of great strength and integrity with a charitable heart. One of a kind that will truly be missed. Forever and always, my father, your friend Sheri Bernard. Doyle was preceded in death by his mother, Pauline Shelton Aten; and father, Doyle Aten Senior. He is survived by his daughter, Sheri (Timothy) Bernard; granddaughters, Abigail Bernard, Taylor Bernard and Sydney Bernard; brothers, Jerry Aten and Mike Aten; nephews, Chris Aten, Matt Aten and Jerry Aten Jr.; niece, Amanda Aten; stepson, Jeff Lucas; stepdaughter, Julie Lewis; and close friends, Dennis Montgomery, Jeff Dice and Gary Harris.

Share Your Memory of
Doyle
Upload Your Memory View All Memories
Be the first to upload a memory!
Share A Memory