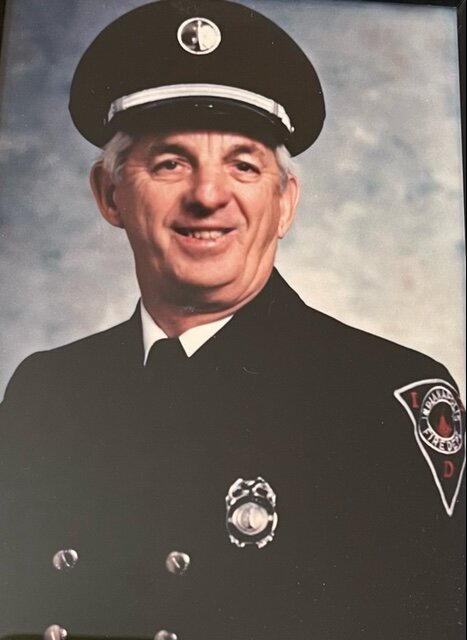 Theodore (Ted) Duilio Floreancig, 91, of Indianapolis, passed away on January 4, 2022. He was born October 5, 1930, to Antonio and Mary (Rinani) Floreancig. He grew up in Haughville, and graduated from George Washington High School. Ted was a loving husband, father, grandfather, brother, firefighter, and friend. His passion for his family, traveling, cooking, bummin’, and golfing knew no bounds. He was also a proud member of the Slovenian National Home and avid lover of potica. Anyone who knew Ted knew his passion for his career and his loved ones. Ted was a firefighter for IFD for 41 years and spent most of his career at Station 1, and then went on to retire from Station 27. He loved everything about being a firefighter, including the brotherhood and bond he created with his co-workers, who became family. When not out on a run, he was often found whipping up a delicious meal for everyone at the station, as he loved to cook. One of Ted’s greatest accomplishments as a firefighter was being recognized by the Red Cross for saving the lives of two individuals. As much as Ted loved being a firefighter, he loved being a family man more. He beamed with pride at every family function, most of the time just watching and listening, taking in everything him and his late wife, Barbara, had created. His memories of past vacations, sporting events, and special moments were sharp in his head, and he always had new stories to tell. Creating memories for everyone was what he was best at. Ted leaves behind his Brother, Bobby Floreancig (Natalie); sons, Steven Hendricks (Melissa) and Gary Hendricks (Linda); Daughters, Denise Spaulding (Dave) and Melissa Parsons (William); grandchildren, Jeffrey (Darla Jo), Jennifer (Brian), Jessica, Nicholas (Sylvia), Damon, Christopher, Alyssa, Michael, Elizabeth (Joshua), William (Brittany), Maria, John, and Katie; many cousins, nieces and nephews; and many beautiful great grandchildren; He was preceded in death by his loving wife, Barbara Floreancig; parents; sisters, Ada Floreancig Lucas and Carmen Floreancig; and brothers Adrian (Tony), Bruno, Geno, and Mario Floreancig. We would like to thank the staff of Westside Garden Plaza for the outstanding care they provided. Memorial contributions may be made to the Indianapolis Fire Fighters Museum at 748 Massachusetts Avenue, Indianapolis, IN 46204.

Share Your Memory of
Theodore
Upload Your Memory View All Memories
Be the first to upload a memory!
Share A Memory