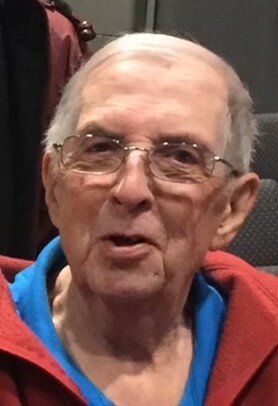 Edward James Knierim, 87, resident of Indianapolis, Indiana, peacefully went to be with the Lord, October 2nd at Life’s Journey surrounded by his loving wife and daughters. Ed “Sonny” was born on May 14, 1934, in Brazil Indiana, the son of Edward and Mildred (Trackwell) Knierim. His father was the founder of Eddie’s Sandwich Shop established Jan, 21, 1931 on 13 S. Walnut St, Brazil, IN. He was baptized June 3, 1934, served as an altar boy, and attended Annunciation Catholic Church and School. He graduated from Brazil High School with the class of 1952 and post graduation completed a course in TV and electronic repair. He married the love of his life and best friend Suzanne Weaver on May 16, 1959 at 6 A.M. at Annunciation Catholic Church officiated by Fr. McSween. When Ed was young, he and his childhood friend bicycled up and down the street through the neighborhood selling ice cream. Knowing how Ed enjoyed ice cream so well, he probably ate more than he sold. As an adult, he frequented Baskin Robbins 31 flavors for some pralines and cream and took his daughters there for a special treat. In later years, he also enjoyed chocolate ice cream and butterscotch malts with extra malt. Ed started work at the Shell station when a stop for gas came with service, a window wash and a check of your oil. After close to two years of service in the Army rank SP4 and active duty overseas in South Korea he began his next and final career. In 1959 he started working for the Postal Service in downtown Indianapolis. He worked in the Business Office Accounting until retiring in 1989. Ed was a curious boy. He wanted to know how things worked. He took apart his Mom’s vacuum and other items around the house and would put them back together, just to learn information. This was the start of his mechanical abilities. Later as an adult, Ed was a handyman, who could fix most anything. After coming home from work, he would spend time maintaining the house and cars, and could be found tinkering at his garage work-bench before dinner sometimes. He liked to stay busy. Some of the money that was saved from doing work himself, he used for his family, whether it be for his daughters’ private education, or for traveling. After God, family came first with Ed. He was a devoted husband, father, grandfather, great-grandfather, brother, brother-in-law, father-in-law, uncle, and great uncle. Ed always liked to be on the move. He had fun building a wooden motor boat from a kit with Fr. Kramer, he owned a motorcycle, and enjoyed driving cars. He also liked to maintain his vehicles with the utmost care. Ed was a very tidy person. Ed enjoyed traveling with family and friends. Vacations would start with an oatmeal cake and a full cooler. After packing up the Nimrod Camper, the family would head out west or up to Canada. In 1967 it was a special trip to the World Expo that included the family and nieces. As the family grew the camper changed to a Shasta trailer, a trip in the 70's included Suzanne’s parents having an amazing time seeing the mountains. Other travels with his family to Gatlinburg were short getaways over a school break. Camping trips with family friends in Brown County State Park would leave us saying for years, and years, “it's just around the bend”. After retirement there was the month-long trip with Suzanne and his brother Bob through Canada to Denali, Alaska and then on the return route through Las Vegas, Nevada. Ed was a member, counter and usher of Saint Joseph’s Catholic Church for 56 years. Back in his younger days he and wife Sue would work the stands at the Indy 500 and the Raceway drags with earnings going to St. Joseph’s. The days started early and were long, but he enjoyed all the people and made the work day memorable with all his jokes and sales pitches. Ed’s ever-present sense of humor was shared with all who knew him. From a joke or a special little present (gag gift) he would make and hand out. Ed will be greatly missed by all who knew him, whether through the neighborhood, work, church, or a family relationship. He was preceded in death by his parents Edward and Mildred Knierim. Ed is survived by his wife Suzanne, 3 daughters Cheryl Knierim Indianapolis, IN, Karen (John) Lynch Chula Vista, CA, Kathy (Matthew) Forston Indianapolis, IN. His brother Robert A. Knierim Brazil, IN and sister Kathy (Timothy) Weaver, Georgetown, KY, 2 sister-in-law’s Kitty (John) Pettit, New Haven, IN and Debra Weaver, Carbon, IN, 4 nieces Shelly (Buddy) Raderstorf, Brazil, IN Nikki (Brent) Gillenwater, New Haven, IN, Heather Stewart, Brazil, IN, Sarah Weaver, Georgetown, KY. 6 Grandchildren Janna (Benjamin O.D.) Oesterling Lafayette, IN Andrea Lynch, Indianapolis, IN, Emily Lynch, Chula Vista, CA, Kelly (Sean) Gray El Cajon, CA, Garrett Forston, Indianapolis, IN, Elliott Forston Indianapolis, IN, 1 Greatgranddaughter Cricket Oesterling, Lafayette, IN and many treasured faithful and loving friends. In lieu of flowers, donations may be made to Saint Joseph’s Catholic Church, the American Heart Association or Alzheimer’s Association Indianapolis, in Ed Knierim’s memory.

Share Your Memory of
Edward
Upload Your Memory View All Memories
Be the first to upload a memory!
Share A Memory