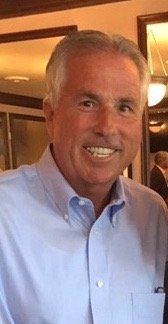 Michael Joseph Strack passed away on October 25, 2020 at the age of 63. He was born on July 10, 1957 in Indianapolis, Indiana, the second of three children, to Eugene and Patricia Jean Strack. He graduated from Cardinal Ritter High School in 1975. He attended Ivy Tech Community College and attained an Associates Degree in Heating and Air Conditioning. He spent 37 years working for UPS, primarily as a package delivery driver, where he was much beloved by his co-workers and customers. He was proud to serve as a steward for the International Brotherhood of Teamsters, Local Union No. 135. Mike married Louise Harrop on November 29, 1980. They raised their 3 children in Plainfield, Indiana before relocating to Long Beach Island, New Jersey in 2013 upon his retirement. Mike was an avid racing fan who spent many happy days with friends and family at tracks around the country, but none meant more to him than Memorial Day weekends at the Indianapolis Motor Speedway. Mike is survived by his wife of 39 years, Louise; children Lauren Strack, Benjamin Strack, and Sydney (Austin) Schwager; and brother Rick (Vana) Strack. As per his wishes, Mike was cremated and his ashes will be spread at the places he loved the most. A celebration of life ceremony will be held at a later date. In lieu of flowers, make a donation to your favorite charity.

Share Your Memory of
Michael
Upload Your Memory View All Memories
Be the first to upload a memory!