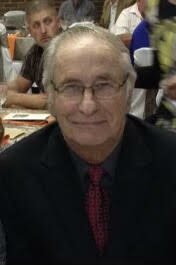 Richard D. Goodin 86 of Indianapolis, IN passed away on Sept 23, 2022. Born in Bedford, IN to Luther & Majel (Pickens) Goodin on Nov 22, 1935. Richard married Barbara McGuire on April 6 of 1956 in Bedford, IN then moved to Indianapolis, IN and started working at Allison’s in the Photo Lab for 35 years. He also worked for channel 6 news filming the Indy 500. He enjoyed coaching little league basketball for his sons. He was a big race car fan. Richard and one son owned a Sprint car team which Bobby Adkins drove for them. Richard also enjoyed going to car shows with another son which owned a car to show. He loved spending lots of time at his lake house on his porch at Raccoon Lake watching people boating and fishing. Richard is preceded in Death by his parents and wife of 46 years of marriage. He is survived by his sister Judy Holsapple (Mitchell, IN) 3 sons-David (Debbie), Scott (Barbara) & Gary (Jennifer England) Goodin. 2 grandsons (Michael & Justin) Goodin, 1 granddaughter Amy Julian & 2 great-grandsons & several nieces and nephews.