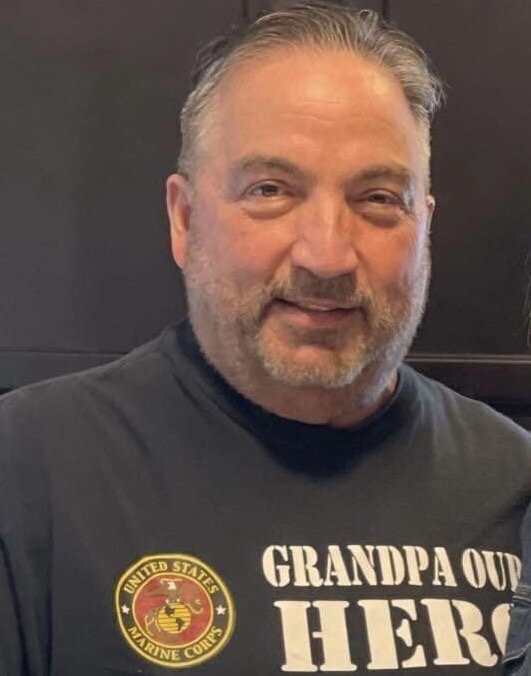 Jeffrey E. Tucker, Age 63, of Indianapolis, Indiana, went home to be with the Lord on August 7th, 2022. He was born March 8th, 1959, in Indianapolis, Indiana. He graduated from Clay High School in South Bend, Indiana. Upon graduation, he joined the United States Marine Corps and, in 1980, was meritoriously promoted to Corporal. He later left the Marine Corps and went on to be a truck driver. He was married to Lorri Tucker. Jeff was an amazing man. His sister Kim wrote, “To know him was to love him.” He had a bright disposition, a charming smile, and a big personality. Laughter could often be heard crossing his lips. He was a ray of sunshine on a cloudy day, and always loved a good joke. He believed life should be lived to the fullest. He embraced new stages, and took on adventures. Jimmy Buffet's motto “It’s Five O’Clock Somewhere” was one he sought to take hold of, knowing that leisure and rest were just as important as a hard day's work. He loved deeply, and gave much to his loved ones. Jeff thought of others before himself, and could always be counted on. His dedication to loyalty was seen throughout his service in the Marines. Semper Fi was the other motto he held fast to, always faithful, and he was, in all areas of his life. Jeff was a devoted husband. He cherished his wife, and saw her as his most important treasure. He was a good provider, and a doting husband. He sought to love Lorri as Christ loved the church. He cared for his children, and grandchildren. He loved them tremendously, and they knew it. He was a family man. Jeff did many incredible things throughout his life. He was a talented hockey player in his younger years. He was an extremely gifted musician and artist. He taught his daughters about music, and loved to see words put to song. He went to school to be a massage therapist at one point in his life. While he never ended up pursuing it as a career, he loved the knowledge he gained about the human body. He drove a truck for many years, and always seemed to have a good story to tell from being on the road. He was a manager at Menards in his last days with us. Jeff was an all around handyman. He worked hard to renovate his and Lorri’s home, and if a new skill needed to be acquired, he did whatever it took to learn it. He knew his way around the kitchen, and cooked the most delicious Italian dishes. He was, of course, a Marine; “Once a Marine, always a Marine.” But he always said his greatest accomplishment was his four daughters. There are endless words to share the sentiments his family has, for Jeff was so many things to so many people. He was a good man, a faithful friend, a loving brother, a devoted son, and most of all, a loyal husband and father. He will be greatly missed. He is preceded by His Mother and Father, Jackie and John Tucker. Niece, Kelly Tucker. Nephew, Johnny Tucker. Stepson, Troy Stump. He is survived by his loving wife, Lorri Tucker. Daughters, Brittany Brown, Kimberlee Tucker, Brandi Tucker, and Alexandra Tucker. Stepson, Justin Stump. Brothers, Nick Tucker, and John Tucker. Sister, Kim Sarabyn. Brother in law, Jim Sarabyn. Sister in law, Mary Tucker. Niece, Abbi Sarabyn. Nephew, Matthew Sarabyn. Niece, Lauren Tucker. Son in law, Joshua Brown. Daughter in law, Consuelo Stump. Grandchildren, Tatum Brown, Elyssa Brown, Titus Brown, Zayden Webb, Zayliah Webb, Chloe Stump, and Troy Stump. A memorial service to celebrate the life of Jeff will be held in Northview Church Greater Lafayette Campus, Saturday, August 13th, 2022, from 3:00-6:00 PM.

Share Your Memory of
Jeffrey
Upload Your Memory View All Memories
Be the first to upload a memory!
Share A Memory