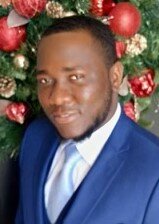 Boris U. Viossi passed away unexpectedly at the age of 36 on February 11, 2022. He was born in Cotonou, Benin on July 29, 1985 to Adangbo Solange and Jean Viossi. He moved to Pittsboro where he lived with his wife and daughter. His time on this earth was short but he made an impact on the lives of many. Boris studied to be an accountant and was a smart businessman, He was an entrepreneur who started his own business exporting cars to Benin. He was an amazing father to his little girl and loved taking her out. He was an amazing husband to his wife Armelle Metangmo whom he met 8 years ago. Boris loved to cook for his family and enjoyed going on short and long distance rides with his family. he is survived by his wife Armelle, his daughter Inayah Viossi and his brother Prince Viossi. There will be a funeral service on March 12th at Stevens Mortuary at 11:00 AM with a visitation from 9:00 AM until time of service. Then a wake held at his family’s home on March 12th at 6 PM . The family is asking for thoughts and prayers as they grieve.

Share Your Memory of
Boris
Upload Your Memory View All Memories
Be the first to upload a memory!
Share A Memory