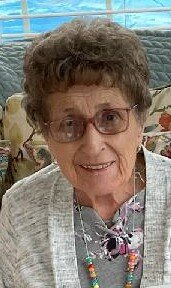 It is with great sadness that the family of Mary Barbarich reports her passing in the morning hours of Tuesday, December 21st at her home in Woodland Terrace in Carmel. Mary was born to Jozefa Zgonc on Thursday October 15th, 1931. Her father Frank Zgonc, predeceased her and her mother also passed away early, leaving Mary an orphan at the age of five. With no blood relatives in the United States, Mary was welcomed in to the home of her godparents Karl and Agnes Brodnik. Mary married Pete Barbarich in June of 1953. He was the love of her life and her devoted husband for 64 years until his in death in 2018. Mary is survived by her daughter Rosalie (Marc) Hetzner, son – Marty Barbarich, son – Paul (Susie) Barbarich and daughter Teresa Brouhard, 8 grandchildren, 3 great- grandchildren, and numerous nieces and nephews. Mary’s life was centered on the westside of Indianapolis, growing up in the Slovenian community in the Haughville area. She was a lifetime member of Holy Trinity Catholic Church. She graduated grade school from Holy Trinity and she and Pete remained parishioners there until the closing of the church in 2014. Her faith and her parish, the Slovenian National Home, and the Slovenian neighborhood were all very important to Mary. Mary sang in the Holy Trinity choir and in the Slovenian choir for many years, and was known for her strong and beautiful soprano voice. Mary and Pete relocated to Avon in 1976. In 1995 they moved further west and made their home on Heritage Lake where they enjoyed the bulk of their retirement years, until 2017. Despite the greater distances of their eventual moves west, Mary and Pete remained faithful to Holy Trinity, and continued being part of their Slovenian community. After fifteen years of marriage and four children, Mary entered the work force as a mail carrier for the USPS in 1968 where she worked until her retirement in 1990. Mary took on a physically demanding job at a time when there were few women in the workforce, especially in jobs that historically had been the domain of male employees. She was a member of the Slovenian Women’s Union, and of St. Aloysius Lodge #52 KSKJ, and the Slovenian National Home. In her retirement years, Mary enjoyed the company of other volunteer bakers and made poticas once or twice a week at Holy Trinity. She was one of the original “Potica Ladies” and was known for her exacting potica skills. Mary’s early days were quite difficult for her. Through these difficulties came a quiet strength, an immeasurable determination, and an ability to persevere. Mary found security in her Catholic faith, her marriage, her children and in her community. She was generous, patient, kind, and selfless for ninety years. Her devotion to her husband and her children was ceaseless, her faithfulness unwavering. Mary was always a formidable force for good. Funeral arrangements are made through Steven’s Mortuary in Speedway, 5520 W. 10th Street, Indianapolis, IN 46214. The showing will be from 4:00 – 8:00 with Rosary beginning at 7:30 pm on Tuesday, December 28th. The Mass of Christian Burial will be held on Wednesday, December 29th at 10:00 AM at St. Malachy, 9833 E. County Road 750 N, Brownsburg, IN 46112. The family asks that memorial contributions be sent to EWTN (Eternal Word Television Network), 5817 Old Leeds Road, Irondale, AL 35210 or the Slovenian National Home 2717 W. 10th Street, Indianapolis, IN 46224.