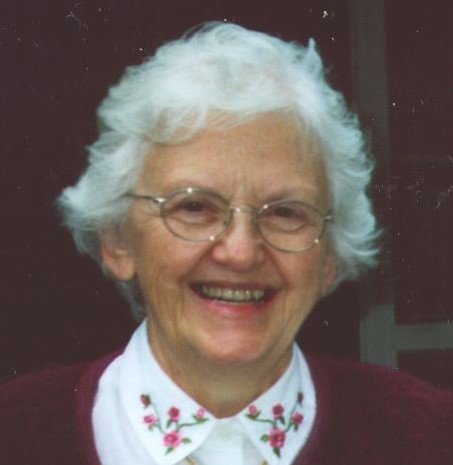 Clara C. Trauner, 90, Speedway, peacefully passed away at her home on Tuesday, September 8, 2020, surrounded by members of her family, thus bringing to a close a long and well-lived earthly life. She was born Clara Dolores Canalas on November 26, 1929 in the vibrant, predominantly Slavic community of Haughville, on the near west side of Indianapolis. Her parents, Maria and Anton Canalas, were Slovenian immigrants who passed their culture, language and deep Catholic faith onto their five children. Her faith and Slovenian heritage – along with her coming of age during the Great Depression and the Second World War – greatly influenced her life. She attended Holy Trinity Catholic School and Arsenal Technical High School in Indianapolis. In 1950, she married her husband of 56 years, Bernard “Bernie” Trauner, settling in Haughville. She gave birth to 13 children within 19 years and provided them all with a Catholic education. Her life was characterized by hard work, thriftiness and cheerful discipline and she raised her children to embrace these same values. She was quietly generous to a multitude of charities, particularly those that provided medical and educational assistance to less fortunate children, including several charities in Appalachian and Native American communities. She was a long-time parishioner of Holy Trinity Catholic Church in Haughville and later St. Christopher Catholic Church in Speedway. She regularly performed volunteer work for her church, received the Sacraments and attended Mass several times a week, reflecting a profound faith and a deep-set belief in the goodness of God. Throughout her life she maintained a love and deep respect for her Slovenian heritage, keeping contact with relatives in Slovenia. With her husband, she travelled several times to Slovenia to visit relatives and friends and to tour the country. She was an active member of the Slovenian Cultural Society and Indianapolis’s St. Aloysius Slovenian Society KSKJ. Proficient in Slovenian and Italian, she gave weekly Slovenian language lessons to small groups of friends and she regularly hosted visitors from Slovenia and Italy in her home. During Christmas and Easter she baked potica, a traditional Slovenian pastry, a heritage passed on from generations before her and one that she passed along to several of her children and grandchildren. Her keen intellect and sharp-witted sense of humor was reflected in her other interests, including history, literature and art. She was an avid reader and completed the crossword puzzle in the daily newspaper until age 90. In her final years she lived with her daughter and granddaughter, Jeanne Trauner and Grace Bell, who generously provided her a quiet and peaceful place to call home and lovingly saw to her needs. In her final months, she found profound joy in her newest housemate, great-grandbaby, Liam. She is survived by 13 children, 33 grandchildren and 18 great-grandchildren, including five sons, Robert (Terry) Trauner of Wheaton, Illinois, Bernard (Jude) Trauner II of Indianapolis, Eric (Tammy) Trauner of Fort Wayne, William Trauner of Bloomington, Illinois and James (Maureen) Trauner of Elkhart, Illinois; eight daughters, Marilyn Trauner of Maryland Heights, Missouri, Margaret Trauner (Charles Robinson) of Durham, North Carolina, Clara (Richard) Powell of Fort Wayne, Elizabeth (Steven) Brodnik of St. Charles, Missouri, Nancy (Paul) Davis of Greencastle, Phyllis (Randy) Marlar of Zionsville, Jeanne Trauner of Speedway and Kathleen (Jerry) Bates of Cloverdale. Also surviving are her sister, Esther (Tony) Ferraro of Indianapolis, brother Robert (Connie) Canalas of Plainfield, sister-in-law Angeline Beach of Oroville, California, and numerous nieces and nephews. She was preceded in death by her husband, two granddaughters, Katherine Bell and Rosemary Trauner, daughter-in-law, Melissa Trauner, brother, Bruno Canalas, and sister, Irene Reid. Visitation will be from 4:00 to 6:30 p.m. with a Rosary at 6:30 p.m. on Saturday, September 12, 2020 at Stevens Mortuary, 5520 West 10th St., Indianapolis. A Mass of Christian Burial will be celebrated on Monday, September 14, 2020 at 11:00 a.m. at St. Christopher Catholic Church, 5301 West 16th Street, Indianapolis. Burial will be next to her husband, Bernard and infant granddaughter, Rosemary in Calvary Cemetery, Indianapolis. In lieu of flowers, donations may be made to St. Jude Children’s Research Hospital in Memphis, Tennessee. The family would like to express our deep gratitude and appreciation to Mom’s primary caregivers, Sherry, Sarah and Uganda from Clarity Care Givers and Kerry from Life’s Journey Hospice. Thank you for your expert and loving care of our Mom.

Share Your Memory of
Clara
Upload Your Memory View All Memories
Be the first to upload a memory!