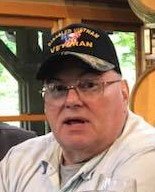 Robert J. Annis, 71, passed away peacefully at his home March 21. He was born on September 17, 1948, in Logansport, to his late parents Richard E. and Edna Mae (Pickens) Annis. Robert is survived by daughter Dianne and her husband, James Newton, of Newburgh; and son Robert and his wife, Dee Annis of Indianapolis. He was preceded in death by his parents; his sister, Sandy; and brothers, Terry and Allan. Robert grew up in Logansport, graduating from Logansport High School in 1966. A sergeant in the United States Army, he honorably served two tours of duty in Vietnam. He worked 24 years at Wilson Foods before the company closed. Robert was a life member of the Disabled American Veterans Chapter #28, the Veterans of Foreign Wars Post #3790, the American Legion Post #60, and the National Rifle Association. Friends may visit with the family from 10:00 a.m. until 12:00 p.m. Monday, April 13 at Stevens Mortuary 5520 W. 10th Street Indianapolis, IN 46224. Funeral Services will be held privately and a Celebration of Life will be held at a later date. Interment will take place in Marian National Cemetery. In lieu of flowers, contributions in Robert’s memory may be made to Richard L. Roudebush Veteran Affairs Medical Center, 1481 W. 10th St., Indianapolis, IN 46202.