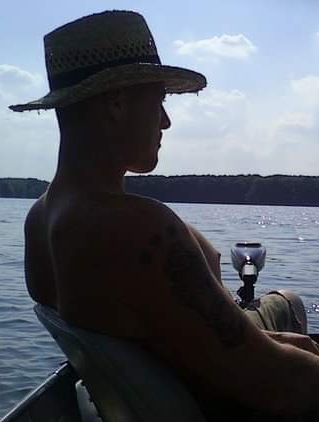 Steven Daniel Wood was born on April 1, 1981, in Indianapolis, Indiana, and left this earth on March 13, 2020, at the age of 38 years old. From his birth, Steven was a firecracker, complete with red hair and a freckled face. As a young boy, he enjoyed spending quality time with his mom, brother Rusty, Aunts Pen & Becky, and Papa Edward. In school, he excelled in most classes and loved playing baseball in the fresh outdoor air. He took a special interest in drawing like his favorite Uncle Dan and developed quite a talent over the years. As he continued to grow, he broadened his interests and friend group, which opened many doors for Steven. As an adult he took up the trade of roofing, and enjoyed doing good work with his hands. At the age of 23 he became a father, and he couldn’t have been happier. Steven had many trials and many joys in his life, but anyone who knew him could sum him up by his true loves which were always: his family, Florida, the outdoors, fishing, and dogs. Whether by lending a helping hand, pulling a prank, or starting the party, Steven absence will be felt, and he will be deeply missed. Steven’s memory will live on in the hearts and lives of those he touched throughout his lifetime. Steven is survived by mother Naomi Ruth Faulkner, step-father Floyd Leon Faulkner, daughters Gabrielle Mckenzie Winslow and Lilyonna Michelle Wood, siblings Rusty Faulkner, Robert Wood, Scott Faulkner, Sarah Adams, Cassandra Faulkner, Samantha Faulkner Gonzalez, Ashley Wood, Ryan Faulkner, and Joey Wood, paternal grandmother Claudine Wood and many aunts, uncles and cousins. He is preceded in death by father Stevie Dale Wood, paternal grandfather Alfred Wood, maternal grandfather Edward Gay, and maternal grandmother Jesse Gay. Steven’s life will be celebrated on Wednesday, March 18, 2020, at Steven’s Mortuary located at 5520 W. 10th Street, Indianapolis, IN 46224. Public visitation will begin at 11:00am and the service will begin promptly at 1:00pm. In lieu of flowers, the family requests that donations be made to the Department of Natural Resources in honor of Steven for his love of fishing and the natural beauty of the outdoors.

Share Your Memory of
Steven
Upload Your Memory View All Memories
Be the first to upload a memory!