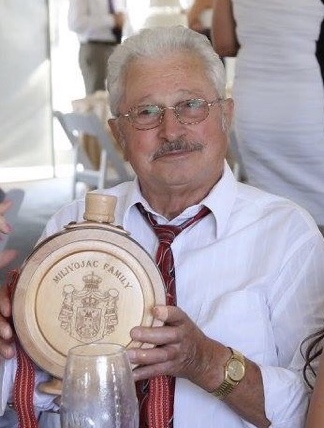 Bogdan Milivojac, age 86 of Indianapolis, Indiana passed away Wednesday, September 18th, 2019. He was a beloved husband, Tata (father), and Deda (grandpa). Bogdan was born in Bosanska Gradiska, Yugoslavia on January 7th, 1933. He was born on Orthodox Christmas day, so he was named Bogdan, meaning God’s day and he lived out his life in this way- as they were each God’s day. Bogdan grew up on a small, family farm in Yugoslavia and was the oldest of 5 children. During World War II, Bogdan and his family were deeply affected by the terrors of the Nazi regime. During his time in the camps, his family was separated and he lost two siblings. Despite the horrific things he witnessed and went through, he followed the example his mother set for him and was extremely devoted to the Lord and his faith. He carried this faith in the Lord with him when he came to Canada in 1956 and then the United States in 1961. He married his wife of 58 years, Dorothy, on November 25th, 1961 and welcomed his only child and son, Mirko, in 1964. He was a devoted husband and Tata and loved his family and worked extremely hard for them. Two years later in 1966, Bogdan became a citizen of the United States and he was extremely proud to be an American and to provide his family a better life. He worked very hard to attain this and spent 30 years at Ford Motor Company as a machine operator, retiring in 1994. Throughout his life, he was extremely devoted to not only improving the life of his family, but also that of his church family. Bogdan was a dedicated member of St. Nicholas Serbian Orthodox Christian Church and spent much of his time helping the church in any way possible. He spent his vacation time painting and doing other duties to help the church and spent his retirement making tens of thousands of candles, which helped to generate nearly $100,000 for the church and community, over his many years serving. Bogdan and Dorothy also served as kumovi (godparents) to many in the Orthodox Christian community and they loved their godchildren and were honored by the responsibility. Bogdan loved to spend time with his wife, Dorothy, son and daughter-in-law, Mick and Marija, and granddaughters, Nina and Dara. He also, after some convincing from his granddaughters, loved his dog, Buddy, short for Budala who he named. He enjoyed working in his garden every summer and specifically loved to grow peppers and onions. Bogdan also took pride in taking care of his yard and loved to roast lamb and pig for Slava celebrations. He enjoyed drinking a glass of Red Rose wine, especially with his best friend, Milo Cvetkovich. Every winter, Bogdan looked forward to spending the cold months in his home in Florida and loved to be outside enjoying the warm weather and taking long walks. Bogdan is preceded by his parents, Mirko and Savka Milivojac. He is survived by his devoted wife, Dorothy Milivojac, his wonderful son and daughter-in-law, Mirko and Marija Milivojac, his loving granddaughters, Nina and Dara Milivojac, his sister, Vesa and her family in Serbia, his brother, Branko and family who still live on the farm, and cousins Milka and Zarko Milivojac. Bogdan was an incredible husband, Tata, Deda, son, brother, friend, and Christian. He will forever be in our hearts and minds and we celebrate the remarkable life of the man we loved so much.

In Lieu of flowers, the family kindly ask that donations be made in the memory of Bogdan to St. Nicholas Serbian Orthodox Church 7855 Marsh Rd, Indianapolis, IN 46278.

Share Your Memory of
Bogdan
Upload Your Memory View All Memories
Be the first to upload a memory!